Though the home town team will not be represented, the city of Indianapolis will be at the center of the football world on Sunday, February 5, when the Super Bowl is played at Lucas Oil Stadium. With a goal of hosting the most accessible Super Bowl ever, staff and volunteers have been at work for months to ensure that the game and all of the events surrounding it are welcoming and accessible for individuals with disabilities.

Ball State graduate and Indianapolis attorney Greg Fehribach is co-chairing the ADA Disability Inclusion Committee for the 2012 Indianapolis Super Bowl Host Committee. Fehribach and his committee have been busy training the thousands of volunteers in best practices for making the game day and the events leading up to the Super Bowl a first-class experience for fans with disabilities. In addition to providing training and literature detailing best practices in working with persons with disabilities, Fehribach and his committee have created a hotline that can be reached for specific questions relative to accessibility.

“Indianapolis has had over 15 years of commitment to accessibility for guests and neighbors who are aging and who have disabilities,” Fehribach stated. “This year’s Super Bowl is the marquee event that will illuminate the hospitality and commitment to the inclusion of fans and guests with disabilities.”

In addition to his work as an attorney and nationally-recognized expert on ADA issues pertaining to facilities (he consulted on the design of Lucas Oil Stadium, the Indiana Governor’s Residence, and the U.S. Capitol Visitors Center), Fehribach is a Distinguished Fellow at Ball State’s Bowen Center for Public Affairs. Heading up the Disability Project at the Bowen Center, Fehribach is studying the employment of individuals with disabilities from a public policy perspective and working to create jobs and internships for college students with disabilities. As part of his work with the Bowen Center, Fehribach teaches courses at Ball State on the political and economic impact of the Americans with Disabilities Act.

Fehribach has enlisted some of his students as volunteers for this year’s Super Bowl. “We’re excited that several of our students have immersed themselves as volunteers to assist with the Disability/Mobility Assistance Team,” Fehribach said. “This is exactly how we’d hoped the project would work.” 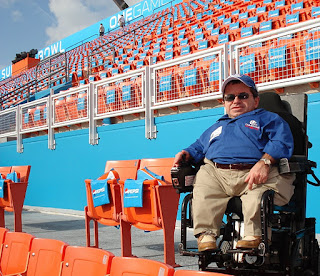 Greg Fehribach checks out accessibility options while attending the 2007 Super Bowl in Miami.